The risk of recession in the major economies has increased yet financial markets are not very intimidated, hoping that central banks will prevent the worst. The USD slipped as interest rates and risk aversion declined. In our view, market optimism is premature, especially given the risks in Europe. Moreover, central banks are unlikely to ease soon if inflation stays stubbornly high.

After a strong rally in the first half of July, the US Dollar Index has been falling over the last three weeks losing more than half of the earlier gain. Even though, the DXY is still up 1.8% since the start of July and 11.3% year-to-date. The pattern of strength and weakness was not uniform among major currencies. The biggest contrast was between the JPY and the EUR. The JPY moved from above 139 versus the USD in the middle of July to nearly 130 on August 2nd, while the EUR struggled to stay above parity. Since the start of July, the JPY is now 1.1% stronger, while the EUR is 3.1% weaker.

The pattern of USD strength until the middle of July and subsequent weakness reflects financial markets’ assessment of recession risks and the implication for monetary policy. Hard data, as well as sentiment indicators, point to an economic slowdown in the major advanced economies that is bordering on a recession. In our own view, the probability of recessions in the US and the Euro-area over the next 12 months is approaching 50%. Financial market indicators imply an even higher probability of recession. Ten-year government bond yields in the US and Germany dropped by 75bps and 100bps respectively since the middle of June. In the US, the yield curve between 10-year and 2-year Treasuries has inverted to -30bps, which is viewed by the market as a clear sign of an upcoming recession.

During the month of July 2022, AENAON Syncro Strategies generated the following total returns net of fees:

Across the spectrum of our benchmark indices, our strategies’ performance during July was rather positive. As a comparison, the US S&P 500 equities index gained 9.11%, the Barclay Hedge Fund Index posted a 2.79% advance, and the Barclay CTA Index lost -0.63% while the other benchmark indices can be seen on the chart below. 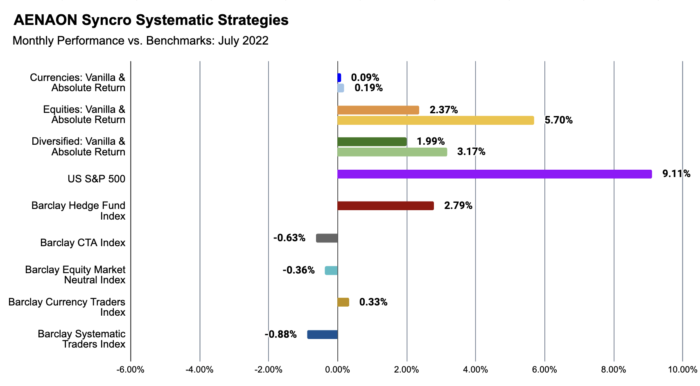 Charts 2, 3 and 4: Inception to Date Performance vs. Benchmark Indices 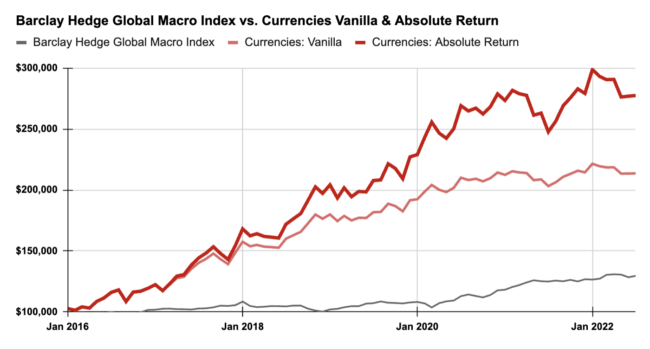 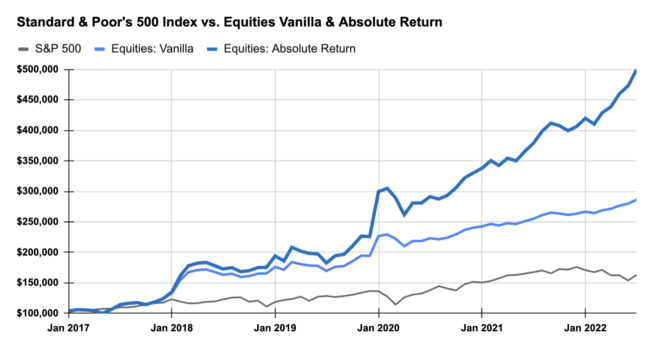 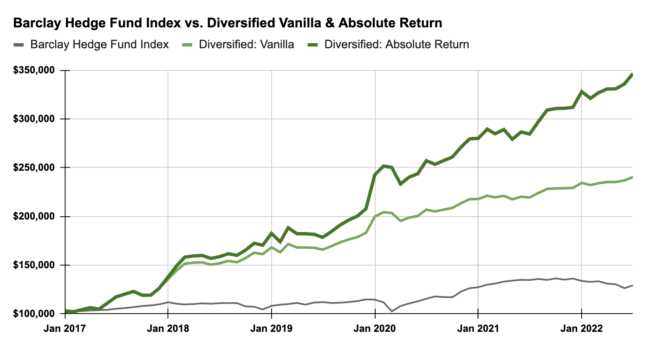 You can always review our updated factsheets at the following Fundpeak links, with monthly performance updates and statistics since inception:

Macroeconomic Environment Review During June the Dollar bounced on the back of the Fed meeting. The...

Macroeconomic Environment Review The US Dollar has been the supreme performer so far this year. The...