Home » Another weak Dollar month as conditions elsewhere improve – Month in Review: May 2021

Another weak Dollar month as conditions elsewhere improve – Month in Review: May 2021

Last month proved to be another poor month for the US Dollar, following on the back of April’s decline. The US Dollar Index, a basket of several of the buck’s major peers, declined by 1.4% during May after a -2.1% drop in the month before. Among the best performers against the US Dollar was the Canadian Dollar while the only laggard was the Japanese Yen that slipped by 0.6%.

In my opinion, the following factors contributed to the Dollar’s further decline: i) Covid-19 vaccination rates are picking up around the world, especially in Europe, allowing other economic regions to catch up to the US’ progress, ii) business sentiment is improving in several countries and regions, namely the European Union, the United Kingdom and elsewhere, iii) commodity prices are on the rise, putting further downward pressure on the Dollar and iv) the US Treasury yields, combined with the domestic equities’ markets, failed to pile on their previous gains.

Having said that, the biggest question in my mind, and the one that will either push the Dollar lower or kickstart another leg higher remains the same: what will the Fed do in regard to their interest rate policy? Several prominent economists suggest that the Fed may delay raising their key interest rate for some time and instead, start tapering their bond purchases, which of course will be a precursor of what will follow. When we get a hint on the timing of this decision, then we will be in a position to attempt to “time” the next move for the US Dollar, so for the time being we remain neutral.

On the other hand, we’re looking at other currencies as more favorable opportunities: the Euro looks attractive, with the pace of vaccination picking up significantly along with an uptick in the business sentiment surveys in the Euro area. Sterling also flashes some interesting signals, at least in the short-to-medium term; its technical outlook and the positive business sentiment suggest some room to the upside, but position-timing is crucial here as the longer-term macro outlook still remains bleak.

Across the spectrum of our benchmark indices, our performance during May was not up to our usual par, with several of the opportunities that emerged during the course of the month not coming to fruition. As a comparison, AENAON Syncro Currencies returned -3.43% last month, versus a 0.55% return for the US S&P 500 equities index, a 1.13% gain for the Barclay Hedge Fund Index, a 0.70% advance for the Barclay CTA Index, a positive 0.37% return for the Currency Traders Index and a 0.77% uptick for the Systematic Traders Index.

Having said that, our underperformance remained safely within our normal risk envelope, which means that however unpleasant, it was to be expected from a statistical point of view that, at some point in time, we would have a strongly negative month. Actually, our overall performance still scores very highly against our peers, and according to Preqin’s research “[AENAON Syncro Currencies] outperformed Preqin’s All Strategies CTA industry benchmark by 11.34% on a five-year annualized basis (as of March 2021)”. 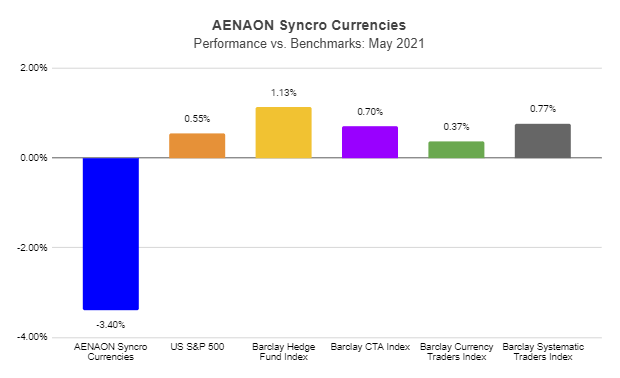 You can always review AENAON Syncro Currencies’ updated factsheet at our Fundpeak link, with monthly performance updates and statistics since inception.

Just like the two months that came before it, August was yet another bullish month for the global eq...

Macroeconomic Environment Review ​Currency markets have struggled for a clear direction so far this...