During June the Dollar bounced on the back of the Fed meeting. The Dollar Index rose 2.7% with the hardest hit being the Swedish Korona (-4.4%) and the least affected being the Japanese Yen (-1.3%). Still, equity markets remain optimistic about future growth, while interest rate markets have become pessimistic. FX markets are stuck in-between. Fundamentals have not changed much and remain a problem for the USD except for the possibility of faster Fed tightening.

This month I decided to quote the analysis of Bernhard Eschweiler, PhD, a senior economist whose views fall exactly in line with mine:

“Higher US short-term interest rates and a flattening of the yield curve are typically USD bullish. On the other hand, bullish sentiment in equity markets is usually a negative factor for the Dollar. Not surprisingly, FX markets have struggled to find a clear direction after the initial response to the Fed meeting. On balance, FX markets are trading in a range with a bias toward USD strength. The better performance of the JPY (it lost much less than all other major currencies versus the USD), as well as the gains of the CHF versus the EUR, suggest that risk aversion has the upper hand in FX markets at the moment.

Recent analysis however suggests that the Dollar still lacks sufficient fundamental support to make further gains. First, the twin deficit (fiscal and current account) remains the largest handicap for the USD. The fiscal deficit has probably passed its peak level but current budget plans suggest that the US deficit as a share of GDP will remain significantly larger than in most other major economies. Similarly, while the US current account deficit has been rising, most other major economies have either surpluses or falling deficits. Second, the cyclical lead of the US economy has faded. We think that this situation will last unless the global recovery falters, which we think is unlikely this year. To us, that also means that oil and other commodity prices will remain well bid, which is typically USD negative.”

Across the spectrum of our benchmark indices, our performance during June was almost flat but still positive. As a comparison, AENAON Syncro Currencies returned 0.30% last month, versus a 2.22% return for the US S&P 500 equities index, a 0.90% gain for the Barclay Hedge Fund Index, a -0.16% decline for the Barclay CTA Index, a positive 1.47% return for the Currency Traders Index and a -0.35% downtick for the Systematic Traders Index. 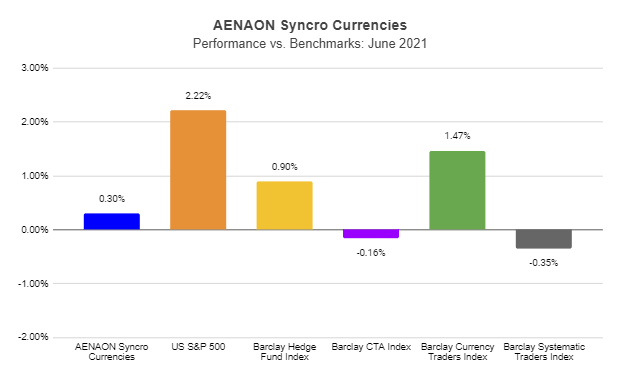 You can always review AENAON Syncro Currencies’ updated factsheet at our Fundpeak link, with monthly performance updates and statistics since inception.

July was another positive month for the global money markets in general as the major central banks c...

Another weak Dollar month as conditions elsewhere improve – Month in Review: May 2021 June 12, 2021

Macroeconomic Environment Review Last month proved to be another poor month for the US Dollar, follo...